Although much-loved New Zealand racehorse Gingernuts was retired in 2018 after injury, his owners praise the quick action by the VRC and Racing Victoria which ensured that he was saved and nursed back to health. He is now taking on new challenges, off the track.

Gingernuts, named after a biscuit but nick-named Jerry, was a three-time Group 1 winner, a treble that started with the 2017 Group 1 NZ Derby (he has led the field out twice since his retirement) along with the Rosehill Guineas and Windsor Park Plate (run at Hastings, NZ) as well as the Group 2 Avondale Guineas – the race where he produced a stunning performance to win after missing the start by six lengths in a result that really turned heads and announced his arrival.

After winning his third Group 1, Jerry returned to Australia to tackle the Group 1 Emirates Stakes at Flemington.

Karyn Fenton-Ellis of Te Akau Racing was watching at Flemington as he cantered past her and his trainer. They agreed that Jerry, the firming favorite, had never looked better. All of a sudden jockey Mick Dee jumped off. They wondered why, maybe the saddle had slipped.

But it was something more sinister, and you could hear a pin drop at Flemington as the horse ambulance arrived. The rapid action by barrier attendants and veterinary team saw the horse quickly bandaged and assisted into the waiting medical vehicle. Jerry was whisked to the Werribee Veterinary Clinic, and his prognosis for survival was uncertain. In freakish circumstances, the gelding had fractured a pastern when cantering to the barriers.

He had surgery at Werribee to correct the break and was nursed back to health at King’s Park Equine Clinic at Mornington. His recovery captured people’s hearts, with New Zealand television covering Gingernuts’ return home to Te Akau three months after his injury.

Fenton-Ellis and her husband David Ellis CNZM praised the VRC’s actions on that almost fateful day.  The VRC team made regular visits to the clinic to send photos to Te Akau of Jerry’s recovery. Fenton-Ellis, as chairman of Waikato Racing Club in New Zealand, said she it was so obvious that the VRC and its staff took their roles above and beyond, their ‘duties’ were driven by their love and concern for racehorses.

Gingernuts was bought for only NZ$42,500 by David Ellis at New Zealand Bloodstock’s Ready to Run sale. His racing career was cut short after that day at Flemington after just 12 starts for six wins and only four unplaced runs. His stake earnings were $(NZ)1,273,422.

“Jerry is the boss here at the farm and sometimes he still thinks he is a racehorse,” Fenton-Ellis said. “With Jerry’s self-found status as the ‘older statesman’, he enjoys helping to educate the yearlings.

I would love to see him take on an ambassadorial role promoting the industry and doing charity work. He cannot emulate Subzero who is in a class of his own, but horses can touch people’s lives and I think he has a real role to play in the future.

“Last year he got so excited leading the field out for the New Zealand Derby that he would not come off the track.  It took a lot to persuade him to return to the birdcage, he wasn’t budging! I think he totally believed he could still give those three-year-olds a decent run for their money – it was amazing to watch his keen observation of the race,” Fenton-Ellis added.

The racing colours he wore on race day at Flemington were posted back to Fenton-Ellis by the VRC. She still has them beside her desk at Te Akau.

“I would love to see him take on an even greater ambassadorial role promoting the industry and doing charity work. He cannot emulate Subzero who was in a class of his own, but horses can touch people’s lives and I think he has a real role to play in the future.”

It seems his charm and reach is already capturing the younger generation, with students at Eltham Primary School in Taranaki even faced with the maths’ problem during New Zealand’s lockdown – Jerry made a cameo video performance for the students, asking how many lengths in total were the margins for his three Group 1 wins?

Fenton-Ellis still reflects on the dark side of what could have been in the unexpected moment when Gingernuts fractured his pastern.

“The race would have started in less than 100 seconds if he had got to his barrier stall,” she said. “He would have been at full gallop and the specialists agree that the injury would likely have been fatal. We thank our lucky stars every day we still have him.

“He is a very special boy with a gorgeous temperament and huge personality, and is loved by so many people and looked after like our child. Jerry will live at Te Akau for the rest of his life, as he so richly deserves”. 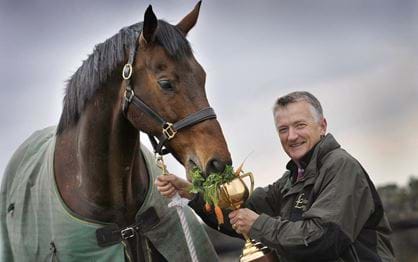 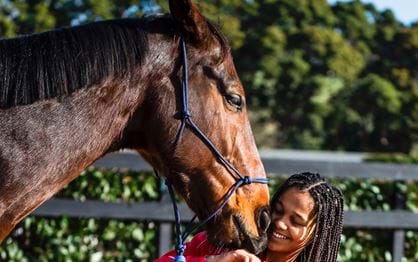