Closing out the racing season at Flemington, the Winter Series provided many memorable moments and also launched some contenders into spring carnival calculations. With many of its race series named after past greats of the turf, the series culminated in a thrilling day of racing on Flemington Finals Day.

Andrew Ramsden Race Day is a pivotal event on the Australian racing calendar for owners and trainers hoping to have their Lexus Melbourne Cup aspirant successful. The winner of the Lexus Andrew Ramsden (2800m) is awarded the first Golden Ticket of 2022 – an express pass into the Lexus Melbourne Cup. As long as the horse is entered in the Lexus Melbourne Cup throughout the spring, they will be automatically guaranteed one of the 24 places into Australia’s greatest race. This year, the Williams family, no strangers to the world’s most important staying handicap, were successful with their imported galloper Point Nepean. The former Irish stayer, after getting an interrupted run during the race, still emerged victorious in a win that part-owner Nick Williams described as a “miracle”. He complimented young rider Alana Kelly for her patient ride when placed in an awkward position in the early stages. “I say it was a miracle that the horse won because Alana had no luck but, testament to her quick thinking, she never panicked and merely made the most of her position, and then it unfolded for her in the closing stages with a strong win and now the ultimate prize of a Melbourne Cup success.” Earlier on in the day, a heat of the VRC-CRV Winter Championship Series won by Mick Price-trained Hezashocka at 80-1 lived up to the name: it certainly was the shock of the day, blindsiding punters when he emerged with 100m to go, fully qualifying himself for a spot in the final.

This race day was an interesting one, with horses returning from spells, but also well-performed country horses making their way to Flemington. The 1600m TCL TV Handicap caused an upset when the former French galloper, Le Don De Vie came from well back to score in strong style. Le Don De Vie was posted as a 100-1 chance in pre-race markets, but the horse showed that he was far more than just a rank outsider. Trained by the seemingly invincible Ciaron Maher and Dave Eustace, the horse progressed from this day, winning in Group company in Queensland and now is looked upon as a genuine threat in races like the Lexus Melbourne Cup. His form in France was excellent and it seems the horse has now finally acclimatised and reconnected with that ability. In the final race on the day’s program, the Off The Track Community Trophy, the locally trained Zac De Boss raced away, underlining his ability on the often-testing 1200m straight track.

By now, the finals for races for 2YO, 3YO, stayers, sprinters and middle-distance performers were beginning to warm up. The feature race on the day was the VRC-CRV Winter Championship Series Plate, and on June 4 it was important for horses to qualify themselves for the finals in July. A memorably named New South Welshman was about to add a new dimension to the heats. Looks Like Elvis came to Melbourne as a talented Sydney galloper, but little was known of his ability when pitted against runners in the heat of the VRC-CRV Winter Championship Series. However, despite missing the start by five lengths, Looks Like Elvis came through the field to score a stunning victory under the guidance of Linda Meech. Meech, like everyone at Flemington that day, was stunned at how the gelding, after giving away such a start, went on to score so well. The day also saw a smart filly called, Passive Aggressive, have her first try up the famous Flemington straight. She handled the assignment with relative ease, streaking away from her rivals and stamping herself as a stakes-class horse of the future.

The Listed A.R. Creswick Stakes was a highlight of VRC Country Race Day, and has historically been a launching pad to Group 1 success with horses such as Nature Strip (2018) and Gytrash (2019) on the race’s honour roll. This year’s race looked to be a race in two and one of the more exciting races to be run of the Flemington Winter Racing Series. Passive Aggressive and Star Patrol, both went into the race with impressive victories on the Flemington straight course under their belt. It was the tough Passive Aggressive however, who managed to draw away and win comprehensively. Star Patrol lost no admirers with his honest second placing. Both are going to be forces to reckon with during the Spring Carnival, with their ability to handle the straight track and fast times a huge advantage heading into the Lexus Melbourne Cup Carnival.

Promising filly, Passive Aggressive, made it 4 from 4 winning the Listed A.R Creswick Stakes, to the delight of her regular jockey, Jordan Childs. (Pat Scala/Racing Photos)

This year’s Penfolds VRC-CRV Winter Championship Series Final was arguably the most competitive in a long time. There was interstate representation, country horses and local gallopers making for a race rich in form and quality. The win by Tuvalu was dominant, however, and gave all of the vital signs that he too will be a horse to be reckoned with in the spring. Making it seven wins from just 11 starts and with a Flemington record of three wins and three placings from six starts, Tuvalu is one to watch. His great mid-race acceleration will take him far in the Spring Carnival. The day also uncovered other spring hopefuls such as My Yankee Girl who won the MSS Security Rivette Series Final, and the Paddy Payne-trained Quang Tri, his Kennedy Oaks hopeful, who took out the Kennedy Taj Rossi Series Final in grand style and looks to be a genuine stayer of the future. The meeting closed with an impressive win by Arran Bay, who scored in excellent fashion to win the TAB Silver Bowl Series Final.

The day started with a performance of an outstanding two-year old Giga Kick in the Trevor Clarke Handicap. Despite racing greenly due to his lack of racing experience, once the youngster put his mind on the job he raced away to win easily. Later on, Quang Tri looked to be the bet of the day, but was upstaged by the lightly raced Skyphios who came down the outside to beat the favourite. Both horses showed plenty of staying prowess and going forward could be big players during the three-year-old features of the Lexus Melbourne Cup Carnival. It’s encouraging to see races such as these programmed by the club to give owners and trainers the opportunity to set their horses for spring targets around the same distances. No doubt, the most impressive win of the day came from Daytona Bay in the K.A Morrison Handicap. After a luckless placing at his previous start, Daytona Bay settled near the lead and by the 800m mark he had increased his lead and was soon racing clear of his rivals, showing that he is one that could emerge in the spring. 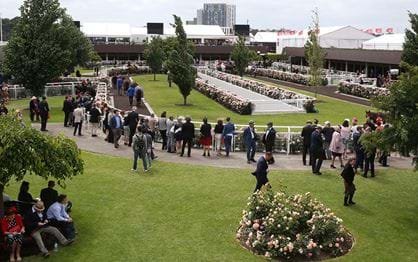