In 2022, a number of significant Melbourne Cup moments celebrate anniversaries. Damien Oliver’s emotional win on Media Puzzle in 2002 and John Letts’ incredible victory on Piping Lane in 1972 are two of them.

In the history of the Melbourne Cup there may not have been a more emotional moment at Flemington than when Damien Oliver secured victory aboard Media Puzzle in 2002. Having lost his brother Jason in a Perth track accident only days before, Oliver needed to call on all his reserves to win the coveted Loving Cup Trophy.

And knowing he had not ridden well on Derby Day three days earlier, there was much speculation as to whether Oliver should take the mount on the Dermot Weld-trained stayer. Yet it was like the script was already written, as Oliver placed the Irish stayer in the best positions throughout and, at the top of the straight, all punters were screaming for Media Puzzle to win.

There was hardly a dry eye at Flemington as Oliver saluted crossing the finishing line and calling to the heavens, ‘My boy, my boy,’ an affectionate exchange between two brothers who had endured a lifetime together. Damien Oliver would return to Perth the next day to bury his brother. It was the heart-wrenching story of the decade.

Before Melbourne Cup Day, 1972, John ‘Lettsy’ Letts had never even been to Flemington, let alone ridden in a Melbourne Cup. He had never ridden Piping Lane, but was yet to lay eyes on the gelding, either. And fair to say, Lettsy never knew what impact the Melbourne Cup was about to have on his life.

He was soon to find out.

It was close to the 1972 Cup that the fun began, with a call from trainer George Hanlon.

“I can vividly remember taking a phone call one night when I was asked whether I had a ride in the Melbourne Cup. I thought it was one of my friends playing a practical joke,” explained Lettsy.

“I said to the person on the end of the line that I was waiting to hear back from Bart Cummings and Tommy Smith, but at this stage, ‘no’ I didn’t have a ride. The caller – George Hanlon – asked if I could ride 48kg. I soon realised he was serious.

“I told George, ‘that should be right’ and next thing I am heading to Flemington for my first ride in a Melbourne Cup,” explained the effervescent Lettsy.

As Cup Day approached, so too did the realisation that he was going to fulfil a lifelong dream. “I was just happy to have a ride, to be honest,” explained the Cup-winning jockey, who went on to win a second Melbourne Cup in 1980 on Beldale Ball.

“I remember asking Piping Lane’s strapper, ‘how does this horse like to run? Forward, back, mid-field?... Where is he best suited in the run?’

“The girl handling him said, ‘I don’t know... but you better ride him properly!’”

Deciding he had better have a game plan, Letts spoke to a couple of jockeys in the jockeys’ room … Roy Higgins, Pat Hyland, Harry White … and one of them said, ‘Best to make your run at Chicquita Lodge’.

Despite not even knowing what Chicquita Lodge was, Lettsy and Piping Lane pushed forward, passing a number of horses feeling the pinch, and entered the long Flemington straight.

“The horse was giving his all and I only had to get past Magnifique. It was a long straight.” Lettsy and Piping Lane were victorious in the final 120m.

“I couldn’t believe I’d won a race at Flemington, let alone the Melbourne Cup. It was quite surreal.”Main image caption: Damien Oliver on Media Puzzle after his emotional win in the 2002 Melbourne Cup. (News Limited) 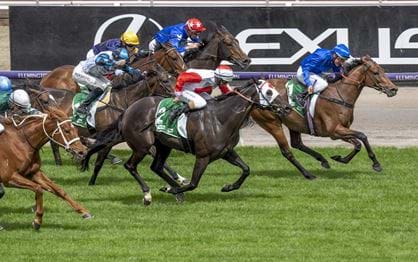