Andrew Lemon is a multiple award-winning historian, best known for his three-volume History of Australian Thoroughbred Racing books. The VRC is extremely fortunate to have him as a contributor, and we decided to find out a little more about him, and where his love for racing began.

Q. Do you have a background in racing or any family connections?

My interest in racing began as a small boy. My grandfather was so old he would tell me that he saw Carbine win the Cup in 1890 – and later admitted that he was eleven at the time, and couldn’t see much at all as a boy himself, but he was there on that great day at Flemington.

He’d often come to our house for Sunday lunch, for what he’d call “good tucker”, and let me have his racebook from the day before. It was in the era of Rising Fast, Straight Draw and Macdougal: names I remembered. Sometimes there was a dud bookmaker’s ticket tucked inside, crossed with a scrawl in crayon. It was fun making sense of the mystery of it all. As a countryman and former stock and station agent, he knew his horses well.

My parents were both regular racegoers – Mum was always horse mad – so school holidays for my brother and me often meant visits to the Mornington races. It was still a country track in those days, with the old figure-of-eight steeplechase course a feature. President of the club Reg Ansett would often arrive by his own helicopter. I think now that I became intrigued by what I’d call the theatre of horse racing. I responded to the colour of horses in the stalls and the mounting yard, the busy betting ring, the jockeys, the trainers and officials, the racegoers. And to the drama supplied by every race.

Q. Please tell us about your career as a historian.

My career as a historian has been unusual. I have academic qualification in history from the University of Melbourne, and worked early as an archivist, but most of my career I have been a freelance or professional historian, researching and writing commissioned histories of people, companies, schools and, above all, of Australian thoroughbred racing.

Q. How did you come to work in the area of horse racing?

My undergraduate thesis in history was called “Racing and Politics: Victoria’s Great Totalizator Debate”. Our state had been the last in Victoria to legalise the on-course tote, back in 1930, though it was the first in Australia to introduce the off-course tote, the TAB, thirty years later.

I looked at the politics around this issue in the days of John Wren, who around 1900 was running his illegal tote shop in Collingwood. To my amazement as a student, the VRC allowed me to inspect the club minute books in their old offices in St Kilda Road. These revealed an unpublished transcript of an interview between Wren and the VRC committee. Wren gave as good as he got. The past comes alive through such original sources.

Q. How did you come to be the expert on all things Flemington?

Ten years later, around 1982, the historian Professor A.G.L. Shaw, who knew I was keen on racing and its history, asked if I would be interested in acting as research assistant to the then State Artist, Harold Freedman.

Harold had been engaged by the VRC to paint a massive “History of Racing Mural” for the newly completed public Hill Grandstand at Flemington. Would I what! This epic work took some years to complete. Harold’s ambition was huge, to include images of all the great horses, personalities and racecourse of significance to racing, and not just in Victoria.

Before the internet this meant endless hours for me searching in libraries and archives, and visits to storerooms and basements in old racecourses around the country. Flemington and the Melbourne Cup were naturally the most important themes, running across all seven of these huge paintings.

The plan developed into publishing the three volume History of Australian Thoroughbred Racing. Like all such ambitious projects, it had its ups and downs. The third volume was not published until 2008. I’ve continued my association with the club as its consultant historian, and one of the greatest privileges has been to be part of the annual Melbourne Cup Tour since 2005.

Not only do I get to tell stories about old Melbourne Cups, I learn wonderful stories from racing people around Australia.

Q. Can you briefly explain your research process?

The essential element is to go back as closely as you can to original sources to get and double-check information from the time it happened. Human memory is fallible, and in racing there are already half a dozen interpretations of how a race was won or lost, as soon as the horses pass the winning post.

In the past twenty years there has been a revolution in getting easier access to digitised old newspapers and archives. We all make mistakes, but I’m always checking. I look for connections in my stories. I do my homework, and look for something forgotten or unexpected.

Q. What is the most satisfying part of your job?

Solving a mystery, and there are plenty in racing. Researching the story of what became of Phar Lap’s 1930 Melbourne Cup trophy was certainly satisfying but there is always something else to discover. Even that mystery has not been entirely solved.

Q. Why do you think it is important to tell the stories of the past?

We are not alone in this world. History reminds us of this. It informs, it warns and it inspires. Mind you, researching the history of past Melbourne Cups will give you some clues but it will never truthfully predict the future. I wish it did.

Q. What is your earliest personal memory of Flemington?

In the late 1960s the VRC briefly trialled a junior membership scheme. I watched my first Melbourne Cup from the members’ old stand in 1969 when the champion Rain Lover, under a heavy weight, bravely held off the challenge of lightweight Alsop. And the very next race Sir Chester Manifold’s champion chaser Crisp won the Cup Steeple with ease. Jockey Tom McGinley was already a sporting hero of mine, for I loved the way he made the riding of jumpers look effortless. This was the same spring carnival when the brilliant sprinter Vain won three top races in succession in the space of one week.

Q. What is your favourite moment at Flemington?

Always that one hour build-up before the Melbourne Cup is run.

Q. What are your top three favourite racing moments in history?

A top three is hard to nominate, especially after mentioning Rain Lover, Crisp and Vain back in 1969.

Everyone on and off course was rightly emotional after Makybe Diva’s third successive Melbourne Cup win in 2005, but so they were when Black Caviar won her Newmarket, and kept on winning.

For bittersweet moments, it was Reckless’s close second to Gold and Black in the 1977 Melbourne Cup.

Q. What do you think it is about horse racing that captures people’s hearts?

The horse. First and foremost. After that, horse and rider. In my first volume, published back in 1987, I called it an ancient fascination: time and again, the artist – writer, painter, sculptor – tries to capture the poetry of the horse.

Q. What is the magic of the Melbourne Cup that endures year after year?

I spoke of the theatre of racing – the colour, the party, the anticipation. But for me it is also the history of this great race, which has changed in its essentials so little over the past 160 years, taking us back to the very earliest decades of Melbourne as a city. All the Queen's horses 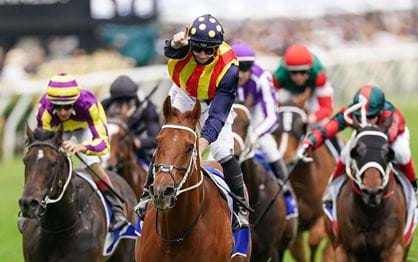