The Victoria Racing Club (VRC) is saddened to hear of the passing of 1999 Melbourne Cup winner Rogan Josh.

The 29-year-old gelding was a much-loved resident at Living Legends and had been a regular visitor to Flemington in the years since his Cup triumph.

Bred in Western Australia, Rogan Josh started his career in the west with trainer Colin Webster before being transferred to legendary trainer Bart Cummings in September, 1999.

Under the care of Cummings, Rogan Josh etched his name into racing history by winning the 1999 Mackinnon Stakes and 1999 Melbourne Cup with jockey John Marshall in the saddle.

Owner Wendy Green, a Darwin schoolteacher, purchased the son of Old Spice from family members after he failed to meet his reserve price in the sales ring.

Green famously drove the 7500-kilometre round trip between Darwin and Melbourne and, following Rogan Josh’s 1999 victory, she stopped off at many towns along the way to share the magic of the Cup with local communities.

Rogan Josh was the last surviving Melbourne Cup winner of the 20th century and held a special place in the hearts of many.

“His story was amplified by Wendy Green who shared the joy of Rogan Josh’s Cup win with the people of Australia.

“The VRC sends our condolences to Wendy Green and all who loved and cared for Rogan Josh during his long and healthy retirement at Living Legends.” 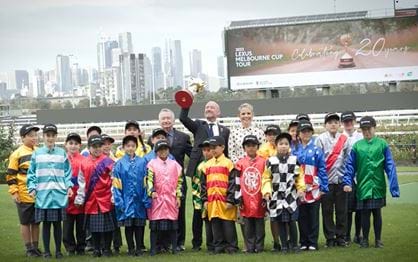